Enter For a Chance to Win Kevin Harvick's Race-Worn Gloves!

Morton Buildings will give NASCAR fans a chance to win authentic autographed Kevin Harvick memorabilia this week as part of a sweepstakes at Morton’s official Twitter page. Morton will give away gloves worn by Harvick in three Sprint Cup races, including his March 8 victory at the Kobalt 400 at Las Vegas Motor Speedway. 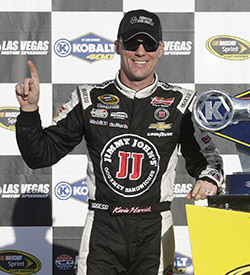 Users that create multiple accounts or tweet multiple entries in the same day will be considered ineligible. The winning Twitter user will be notified via direct message once the contest is complete.

The 2015 NASCAR season is less than a month old and Harvick is off to an outstanding start. The reigning Sprint Cup champion leads the current driver standings after beginning the season with four consecutive top-two finishes, including back-to-back wins at Las Vegas and Phoenix.

Morton began its partnership with Harvick and NASCAR prior to the 2014 season.

Last season, Harvick drove twice in front of a nationally televised audience with Morton Buildings as the primary sponsor of his Chevrolet. He started and finished fourth in the Lilly Diabetes 250 at Indianapolis Motor Speedway on July 26 and later earned a runner-up finish as part of the Kansas Lottery 300 at Kansas Speedway on Oct. 4.

Making the Most of His First ‘Morton Experience’

Morton Teams Up With Mike Wolfe