The Lois and Ralph Cole Museum, located at 6190 Highway 110 in Storm Lake, Iowa, opened to the public in 2015.  Mildred Hadenfeldt, the younger sister of Lois Cole, is the curator of the museum at the age of 87.  Lois and Ralph’s plan was to have a museum that would showcase how hard the older generation had to work.  The museum is actually made up of five buildings total, of which four are Morton buildings:

The site features an incredible eight plow statue in front of the main building that consists of a six bottom semi-mounted plow on up to a toy plow on top.  The plows were painted accordingly to what they were brand new.  There is also a 1913 and 1923 Model T on the site, which outside of the upholstery and tires, are all original. 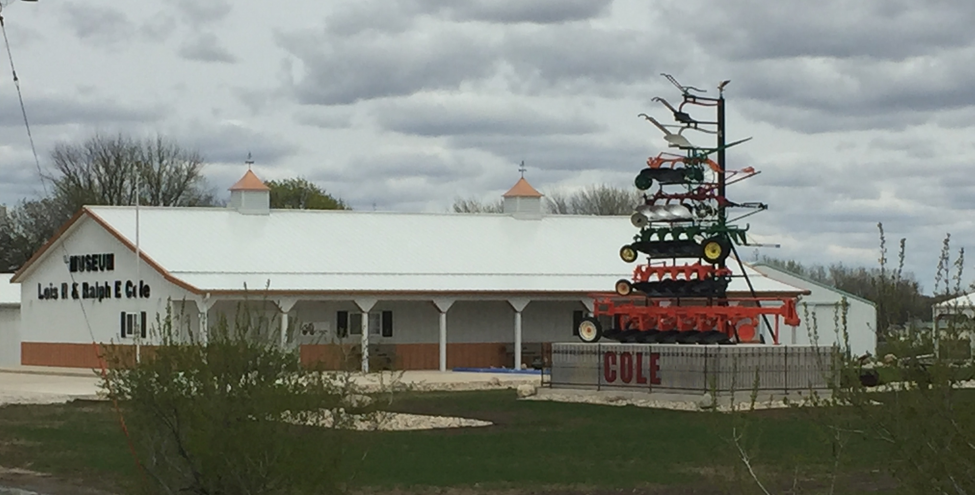 Lois and Mildred grew up outside of Schaller, Iowa.  Ralph, a lifetime farmer, grew up one mile west of the museum.  The girls lived on a farm, were the oldest siblings and tomboys, and loved to work outside with the animals.  They were both very involved in 4-H as well, with several of their home-raised calves receiving the Grand Champion award over the years.

Ralph and Lois were married in 1947, and were partners in their farming business.  “Ralph passed in 2007 and Lois in 2010.  They didn’t have family and neither did we,” said Mildred.  “Our brother had sons that come to Iowa occasionally.  Her first love was farming and going to antique sales.  Ralph’s father was a homesteader, and had a century farm already in 1964.  Ralph’s father had machinery that he just kept on the farm when it became obsolete to use and bought new.”

Mildred plans on donating to the museum as well.  The Cole Museum is the opus of this family’s generation of collecting fascinating items, even a building.

“The barn replica just came into my mind, and I believed that Morton could copy it,” said Mildred. “We kept all the outside wood of the old barn and put it on the inside of the barn.”

Since opening in 2015, Mildred has conducted lots of tractor tours and assisted living tours. She’s had visitors from Japan, England, and Portugal too, and received many compliments on the buildings.

“They’re so well insulated.  With ceiling fans, they’re so nice and cool.  Some people asked if they’re air conditioned,” she said.

After constructing four buildings, she was also very complimentary of the crews that built them.

“They’re the best.  When they’re working, they are busy, busy, don’t fool around and have everything cleaned up.  My foreman was Todd and he sure was good, so I asked for him again with this new addition.”

A Building for All Seasons

Our Sweepstakes is Back and Bigger Than Ever!

The History of Morton Buildings: Part 1

Roof Types and Styles for Your Morton Building